CREB® released their final monthly stats package for 2022 saying the year saw record-high sales and double-digit growth. December sales eased, however, slowing sales over the second half of 2022 were not enough to offset earlier gains as sales reached a record high of 29,672 units in 2022.

Over the past several months, the pullback in sales was also met with a significant pullback in new listings, causing further declines in inventory levels. As of December, there were 2,214 units available in Inventory, making it the lowest level of inventory reported for December in over a decade.

“Housing market conditions have changed significantly throughout the year, as sales activity slowed following steep rate gains throughout the later part of the year,” said CREB® Chief Economist Ann-Marie Lurie. “However, Calgary continues to report activity that is better than levels seen before the pandemic and higher than long-term trends for the city. At the same time, we have faced persistently low inventory levels, which have prevented a more significant adjustment in home prices this year.”

The housing market in 2022 generally outperformed expectations both in terms of sales and price growth. 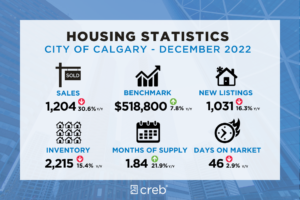 Sales in Airdrie have declined since April, mainly because of the significant drop in detached home sales. December was no exception, as sales slowed compared to last year’s levels. Despite recent declines, year-to-date total residential sales increased by seven percent and have set a new record-high of 2,469 units. Regional population growth combined with the relative affordability of homes in Airdrie compared to Calgary are some factors supporting the record sales in 2022.

While new listings trended down in December, 2022 saw a general rise in new listings in the market. This has helped support some recent year-over-year gains in inventory levels over last year’s exceptionally low levels. Recent adjustments in both sales and inventory levels have caused the months of supply to trend up from the strong seller’s market conditions reported earlier in the year. However, conditions remain relatively tight with less than two months of supply. 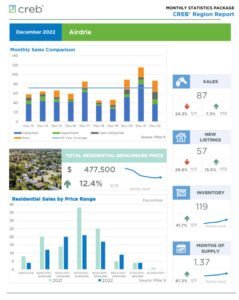 December sales eased, contributing to the year-to-date decline of eight percent. The annual pullback in sales was met with new listings comparable to last year. This has helped support some inventory growth in the market, but levels are still well below what is typically available in the resale market. While inventory levels remain low, the recent pullback in sales has resulted in more balanced conditions taking some of the pressure of price growth seen over the last four months of the year.

Sales activity eased in December, but the year-over-year pullback over the past few months has not offset the gains reported earlier in the year, as year-to-date sales activity rose by nearly two percent. This growth in sales was met with additional new listings in the market, helping support higher inventory levels over last year’s record lows. Even with some inventory growth, conditions continue to remain tight with under two months of supply, placing limits on the price adjustments. 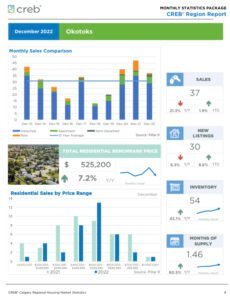 Read the full release  here http://www.creb.com/News/Media_Releases/2023/January/2022_saw_record-high_sales_and_double-digit_price_growth/ and connect with me if you have any questions about how the stats relate to your home!